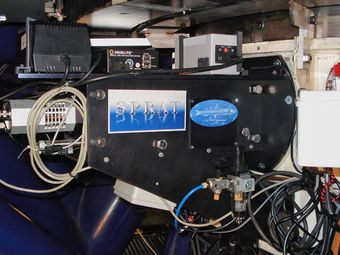 The instrumentation group at ARI has a wide range of interests in optical and near-IR observations. These include the design and construction of imaging cameras, polarimeters and spectrometers, as well as the development and deployment of software for both single instruments and homogeneous and heterogenous networks of instruments.  It is also responsible for the operations and maintenance of the 2.0 metre fully robotic Liverpool Telescope, for which the group also has the responsibility of operation and maintenance and is leading the development of a new 4.0m robotic telescope

The instrumentation group has also been heavily involved in the development of new standards for telescope interoperability through the eSTAR and Heterogenous Telescope Networks projects. These technologies are now in use as part of the Robonet II microlensing search for exoplanets operating on the Liverpool and Faulkes telescopes. A new software interest of the technology group is machine learning for the analysis and classification of time variable astronomical sources.

We offer PhD projects in all our research areas. We encourage potential applicants to contact individual staff members about projects.

The New Robotic Telescope (NRT) is a Liverpool John Moores University project in collaboration with the Instituto de Astrofísica de Canarias (IAC), the National Astronomical Research Institute of Thailand (NARIT) and the University of Oviedo.

Following the on-going success of the 2-metre fully autonomous and robotic Liverpool Telescope (LT), the NRT will be a 4-metre facility, co-located with the LT on La Palma, designed for rapid-response, time-domain astronomy. The project is currently in the design phase, with an on-sky target date of 2024. A combination of light-weight mirror technology and advanced material science will allow the NRT to slew to any part of the sky and be observing a target within 30 seconds.

This EU H2020 OPTICON funded project aims to build on the designs of our previous LOTUS and SPRAT spectrographs in order to provide generic designs that may be copied at low costs by other observatories to allow 2m class telescopes to participate in rapid response followup of transient sources.  Copies are already in development for the OHP 1.93m and the new 1.0m Lesedi robotic telescope at SAAO.  As well as the spectrograph hardware, we are developing a generic spectral reduction pipeline to allow quick and easy calibration of data by non-expert users.

Working in collaboration with the ARI astro-ecology group, joint PhD student Maisie Rashman is exploring the use of uncooled microbolometer arrays for mid-IR imaging both animals on the ground and celestial sources in space.  This is the first time this technology has been applied to astronomical imaging, and aims to allow access to a currently poorly resourced wavelength range with smaller telescopes.

The STFC funded MOPTOP project takes a number of already novel aspects from the RINGO series of polarimeters (a fast rotating element to allow high time resolution; the use of fast readout, very low noise cameras allowing a unique, post data acquisition, signal to noise ratio optimization; the use of dichroic mirrors to provide multi-wavelength capability) and adds a unique optical dual-camera configuration to minimize systematic errors and provide the highest possible sensitivity.  A single wavelength prototype will be fitted to the telescope in early 2019, with the full 3 band instrument scheduled by the end of the year.

WEAVE - a new super-efficient spectrometer for the WHT

WEAVE is a wide field multi-object spectrograph for the William Herschel Telescope which will employ up to 1000 fibres, allowing astronomers to take spectra of many hundreds of objects simultaneously. The instrument is moving forward to first light in 2019. Mr Stuart Bates and Mr Chris Mottram are leading the STFC funded ARI effort to design, build and commissioning of two liquid-nitrogen-cooled cryostats for the instrument, each containing a pair of 6000x6000 pixel CCDs aligned to micron precision, along with the low noise readout electronics and controller software.

Our optical imager IO:O, developed by members of the ARI instrumentation group, is very much the work-horse instrument on the LT. In early 2015, users of the telescope have seen the addition of its near-infrared counterpart, IO:I. Together these two instruments allow for the near-simultaneous imaging, photometry and monitoring of variables, transients and targets of opportunity in the optical and near-IR. A data reduction pipeline is in place and - as with all LT instruments - fully processed images are available to users within minutes of acquisition.

SPRAT and the classification of faint transients

To aid with the identification of faint transients, particularly novae and supernovae, a new high-throughput low-resolution optical spectrometer SPRAT has recently been installed on the LT. During his PhD Andrzej Piascik was central to the characterisation of this instrument used it to classify transients discovered by the GAIA space telescope.  Dr Piascik is now employed as an Instrument Scientist working on the new MOPTOP polarimeter.